Growing up in Milwaukee, snow in the winter was a regular occurrence for me. I grew up with snow-pants, snow-boots and making snowmen on cold winter days. Walking in a foot and a half of snow was not unusual, nor was seeing the “salting trucks” on the road. However, there are places less accustomed to having a sizable amount of snow, such as Jerusalem. For the second out of three winters, Jerusalem got hit with a massive snowstorm. Schools and roads were closed, cities were physically cut off from one another and people rushed to the grocery to get enough food to outlast the storm. Tens of thousands were left without power and people were left stranded.

Israel took many precautionary measures, closing the main highways and warning people to stay put. Centers were also established for those who were stranded to stay the night.

In the northern United States, we do not panic upon hearing about a coming snowstorm. We might try not to leave our home (except for work) but for the most part business is conducted as usual. That was not the case in Jerusalem, which the storm hit very hard, and which does not have the same infrastructure for dealing with snow-as a big storm is a rare occurrence.

Here are some pictures of the Jerusalem snow: 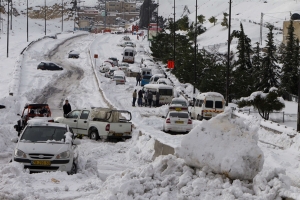 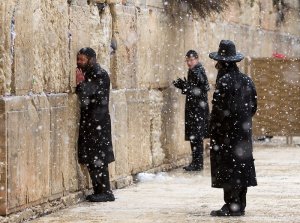