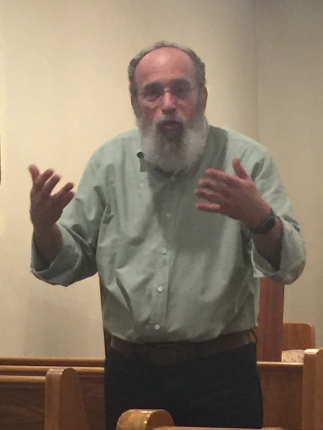 This week concluded three life-changing lectures for me as we had Dr. Arthur Kurzweil as our Scholar-in-Residence. I had studied Kabbalah at JTS and taught the basics of Kabbalah at the Jericho Jewish Center but Dr. Kurzweil explained the Sefirot, or emanations of G-d, as well as the central teachings of Kabbalah in a way that finally made sense to me. Dr. Kurzweil has been the driver and close confidant of Rabbi Adin Steinsaltz, one of the greatest minds of our generation, a master Kabbalist and scholar of Talmud who recently completed translating the entire Talmud into English, after previously translating it into Modern Hebrew. Dr. Kurzweil often quoted Rabbi Steinsaltz in his remarks.

The first talk was 20 Kabbalistic Ideas I Made Sure to Teach My Grandchildren. One of the ideas that really clicked with me is “Sometimes It’s Appropriate to Be Inappropriate,” that nothing is black-and-white. He referenced a story I had heard from Rabbi Berel Wein that if someone comes to you asking if a chicken’s kosher and they cannot afford another one, you find a way to say that the chicken is kosher. He also mentioned the Lincoln Square Synagogue mehitza which is made out of glass but is serving a young, single Orthodox population who might not come to a synagogue that had a tall, opaque mehitza. He also referenced how a woman ran towards Rabbi Steinsaltz to embrace him and rather than embarrass her he opened his arms so that they touched hands. He contrasted this with the Hasid Shoteh, or pious fool, who sees a woman drowning and says “halachically I can’t touch her,” so he lets her drown.

The other principle that hit me was that you need to taste/experience things and every once in awhile you get a flash of understanding. Dr. Kurzweil said in the name of Rabbi Steinsaltz to not only teach your children what they can understand but also the most abstract theological notions. For the Kabbalist, the blessings are the moments of awareness and consciousness with which one can connect with G-d.

The second session was The Kabbalist and Suffering.Dr. Kurzweil began by asking how does it feel for the angel of death to separate the body and soul? The Talmud (which he said it one in the same with Kabbalah), says that it either feels like separating a hair from a glass of milk or a ball of spikes in the throat with someone pulling on the rope. Do you view death as a graduation or as something to resist? Rabbi Steinsaltz said that the meaning of “Niftar,” or to die, is that one’s soul is patur, or relieved, of its earthly duties. He defined the soul as any part of one’s body which is not physical and talked about gilgul haneshamot, the reincarnation of souls. The conclusion he gave about suffering is that while we don’t discuss suffering with someone when they are suffering, later we tell them that suffering is considered a “descent for the sake of ascension,”-that when we suffer it is to raise us up to overcome it, and our soul will be on a higher level because of it. He said obviously it can’t explain the major, cataclysmic sufferings, such as the Holocaust (in fact, he spoke of how Rabbi Steinsaltz, when asked to speak about the Holocaust, gave an hour and a half speech about why he was not, for people are still suffering from it). At the same time, he said it helps explain the smaller examples of suffering in his life.

The topic of Dr. Kurzweil’s third and final session was Who Am I? Where Did I Come From? Where am I Going? What for? Why?  He began the talk by quoting Rabbi Steinsaltz who told the New York Board of Rabbis, “Kabbalah is the official theology of the Jewish people.” He discussed how Rabbi Steinsaltz’s book The Thirteen Petaled Rose references different levels of consciousness: the physical, emotional, intellectual and spiritual aspects. These correspond to four of the five levels of the soul: nefesh, ruah, neshamah and hayah. as well as to the four worlds referenced at the Tu B’Shvat Seder: asiyah, beriah, yetzirah and atzilut. The question, Dr. Kurzweil posed, is which is the rider and which is the horse? Do our emotions direct our intellect or vice versa?

Dr. Kurzweil then went into greater detail about the Sefirot, the ten emanations of G-d, which he had begun to describe the previous week. Keter, or crown, is above everything else and represents those aspects of G-d to which we can’t connect. Then there is a triangle of Chochmah (intuition/flashes of awareness), Binah (analyzing/breaking things apart) and Daat (one’s inner experience), all of which deal with intellect. The next triangle is chesed (the quality of expansiveness/reaching outward), Gevurah (contraction, inwardness) and Tiferet (harmony between the two) which deal with emotions. Finally there is the triad of Netzach (the urge to get things done), Hod (bearing down and actually doing it) and Yesod (connection) which represents our physicality. Finally there is Malchut, the “kingdom,” and all of these triangles impact the greater kingdom.

Dr. Kurzweil described Halacha as the choreography of a dance, that all of the “do’s” and “don’ts” are not ends in and of themselves but rather the beginning of a process of connecting with G-d. Each of our acts is of cosmic proportion, including saying Modeh Ani when we wake up, differentiating between our soul (the rider) and our body (the horse). Then we clean our hands as a sign of purification (Taking the high road when we make choices). He described the Shemonah Esrei, or Amidah, as a ladder of consciousness and how one’s 5 fingers around the Kiddush cup correspond to the 5 levels of the soul.

I found Dr. Kurzweil’s talks extremely compelling as we engage in this process of Heshbon Hanefesh, of self-accounting, approaching Rosh Hashanah. Let us strive for something deeper these High Holidays in connecting with G-d and with our community. As Dr. Kurzweil said quoting Rabbi Steinsaltz, “one’s relationship with G-d is a personal affair.” However, he also quoted the Lubavitcher Rebbe after Dr. Steinsaltz came to him saying he had 3 projects to do, each of which would take more than a lifetime. The Rebbe said, “Add to them,” for he believed one could put so much pressure on him/herself that s/he could transform into a different person. May we work hard to strengthen ourselves and engage in self-transformation so that we can ascend to greater heights than we had ever imagined.